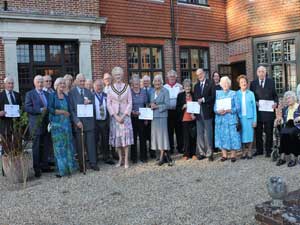 New Forest residents who are regarded as ‘diamonds’ in their communities were given the chance to sparkle at a special celebration recently.

New Forest District Council’s Chairman Cllr Alexis McEvoy hosted a reception to honour local individuals who really make a difference because of their tireless work within their community. Two New Forest couples who are celebrating their diamond wedding anniversary this year also attended.

The celebratory event held at NFDC’s offices in Appletree Court, Lyndhurst, to mark the Queen’s Diamond Jubilee, was a great success. Cllr McEvoy paid tribute to the dedicated individuals nominated by their town or parish council.

Some of the “diamond efforts” included organising local community events, running day care and clubs, fundraising for charities, supporting the local schools and churches, Guides and Scouts, and work as a GP, a litter picker and the editor of a village magazine.

Cllr McEvoy presented a certificate and an NFDC glass paperweight to:

Cllr McEvoy said: “I am delighted to be the council’s Chairman during the Queen’s Diamond Jubilee year and I was keen to mark the occasion by recognising the dedication and hard work of these very special people who are regarded as ‘diamonds’ in their own communities.

“The New Forest should be very proud of these selfless individuals who enhance the quality of life for others and provide services which make their communities a nicer place in which to live.”